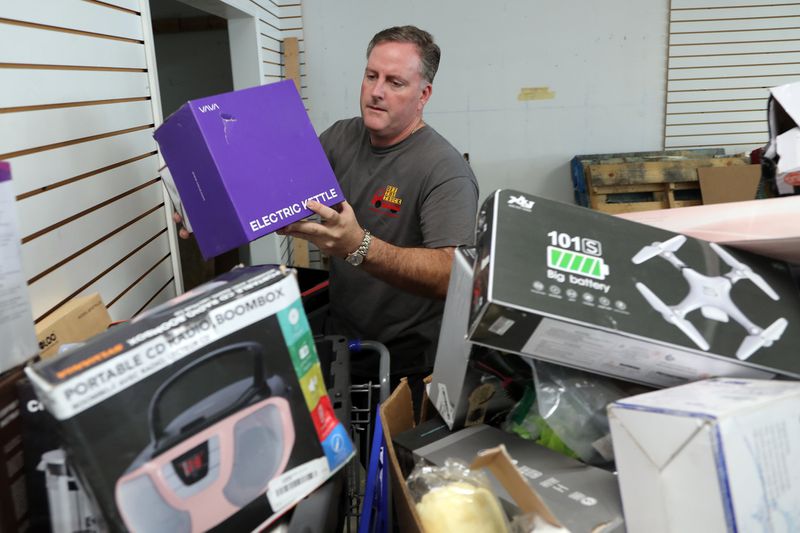 Wednesday was $1 day at Margate’s newest retail store, Off the Truck Liquidators, and bargain hunters were in full force, rummaging through plain brown cardboard bins for closed-out and overstocked goods that once sat prominently on shelves of the nation’s major retailers.

Customers were buying items for $1 that were passed over when they cost $6 on Thursday and Friday, $4 on Sunday, $3 on Monday or $2 on Tuesday.

Connor Owens reached deep into one of the 4-square-foot bins, picked out a 10-CD set of vintage BBC Radio comedy acts and used his phone’s camera to scan its bar code. Instantly his eBay app showed the same set selling for up to $60 on the auction site, where he planned to resell it.

Owens dropped the item into his large blue shopping bag next to a Halloween mask, charging cable and universal remote. “That’s a good score,” he said. “It made my whole day.”

Some of the same customers return to the store at 2440 N. State Road 7 on Thursday morning, when the owners blow out any leftover items for 25 cents each. Then the store closes for the rest of the day to give the owners time to restock with a fresh load of closeout items that they’ll offer for $6 each on Friday and Saturday, then for $4 on Sunday and so on.

Michael Elmudesi, who lives in West Boca and develops real estate in the Dominican Republic, opened the business with two partners, financial consultant Jonathan Swartz and attorney Roger Franks, both of Delray Beach.

“I have friends in the business who have been telling me for five years that I should get into it because there’s nothing like it in South Florida,” Elmudesi said.

That might be because lease rates for South Florida retail spaces tend to be too high for liquidation stores, Elmudesi said. But the owners found a vacated discount store for the right price between Beall’s Outlet and Frenchie’s Bicycle Shop in the Towne Shoppes strip mall, a few steps from Presidente Supermarket. And Margate, with its mix of middle-class families, budget-minded retirees, and immigrants from the Caribbean and Latin America, seemed like an ideal target market for a liquidation store, he said.

Word about the store spread during its first week on Facebook’s Margate Florida Residents page, where former City Commissioner Le Peerman boasted of finding a bargain on psyllium husk powder. “Going through bins is fun,” she posted.

Shoppers, who filled the store less than a week after its grand opening on Oct. 25, seemed to embrace the concept.

Laura Pastore, Margate’s director of risk management, called the store “a bargain hunter’s delight” as Elmudesi rang up a shower curtain she found. She said she’d already been in the store three or four times and has bought about 20 items. She’ll probably come a couple times a week, she said.

Faith Kaminsky Cohen, an artist who lives in Parkland, said she loves finding cheap leftover items she can incorporate into her art, like a set of plastic straws molded in the shape of men’s genitalia. They’ll become part of a sculpture, she said.

Brian Dampier, of Margate, has been in the store every day since it opened, buying items to resell on eBay and Facebook’s Marketplace. On Wednesday, he found an indoor garden grow light for $1. On Friday, he spent $6 on a set of jumper cables he quickly resold for $30.

Elmudesi said his store gets its merchandise from liquidation wholesalers. They sell pallets stacked with goods closed out by large retailers such as Walmart, Target, Home Depot, Lowe’s, Walgreens, Macy’s and Amazon.

Behind the counter, the store displays some goods obviously worth far more than $6 — such as Beats headphones, Seasons 1-7 of “Game of Thrones” on DVD and high-end chef’s cutlery sets. Those are available for what are still deep discounts off their full retail value. And packaged food, drink, hygiene and health products stocked on shelves along the store’s perimeter are priced at half off normal retail, Elmudesi said.

But the main attraction is clearly the churn of mystery goods that start at $6 in 37 bins in the middle of the store.

“A guy came in who trains German Shepherds as a hobby and he showed me an online listing for an electric shock collar that was $250. He bought it for $6,” Elmudesi said.